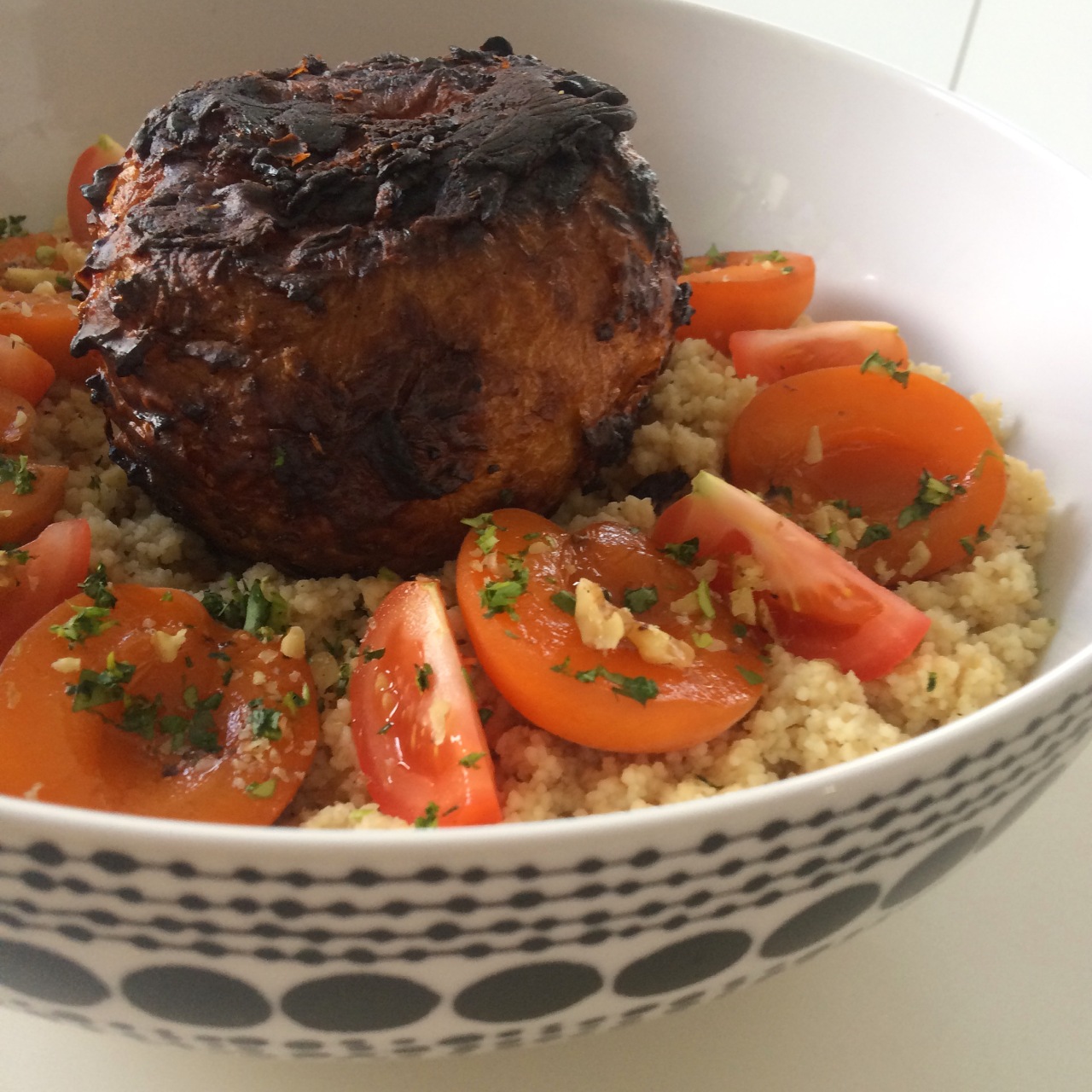 Inspired by perusing the NOPI cookbook by Ramael Scully and Yotam Ottolenghi, I came across their recipe for ‘whole roasted celeriac’. This is my interpretation of that kind of dish using a rutabaga.

For the pistachio pickled apricots:

Start by placing a baking dish with a layer of flavourless oil into the oven at its hottest setting. Then, boil the rutabaga for 15 minutes in a big pan of salted water.  Whilst it’s boiling you can start making the spice crust. In a bowl combine all the ingredients until they make a sticky, aromatic paste. When the rutabaga is sufficiently boiled, take it out and pat it dry with some kitchen towel/tea towel. Now cover the vegetable in the spicy mixture. Take the baking tray out of the oven and place the covered root vegetable in the oil, so it starts sizzling. Be careful the oil doesn’t spit onto you!

If you’re going to make the pickled apricots, I’d do them the night before, so they have time to soak up the pickle. Simply fill up a small dish with the vinegars, place the apricot halves in and top up with a splash of water. 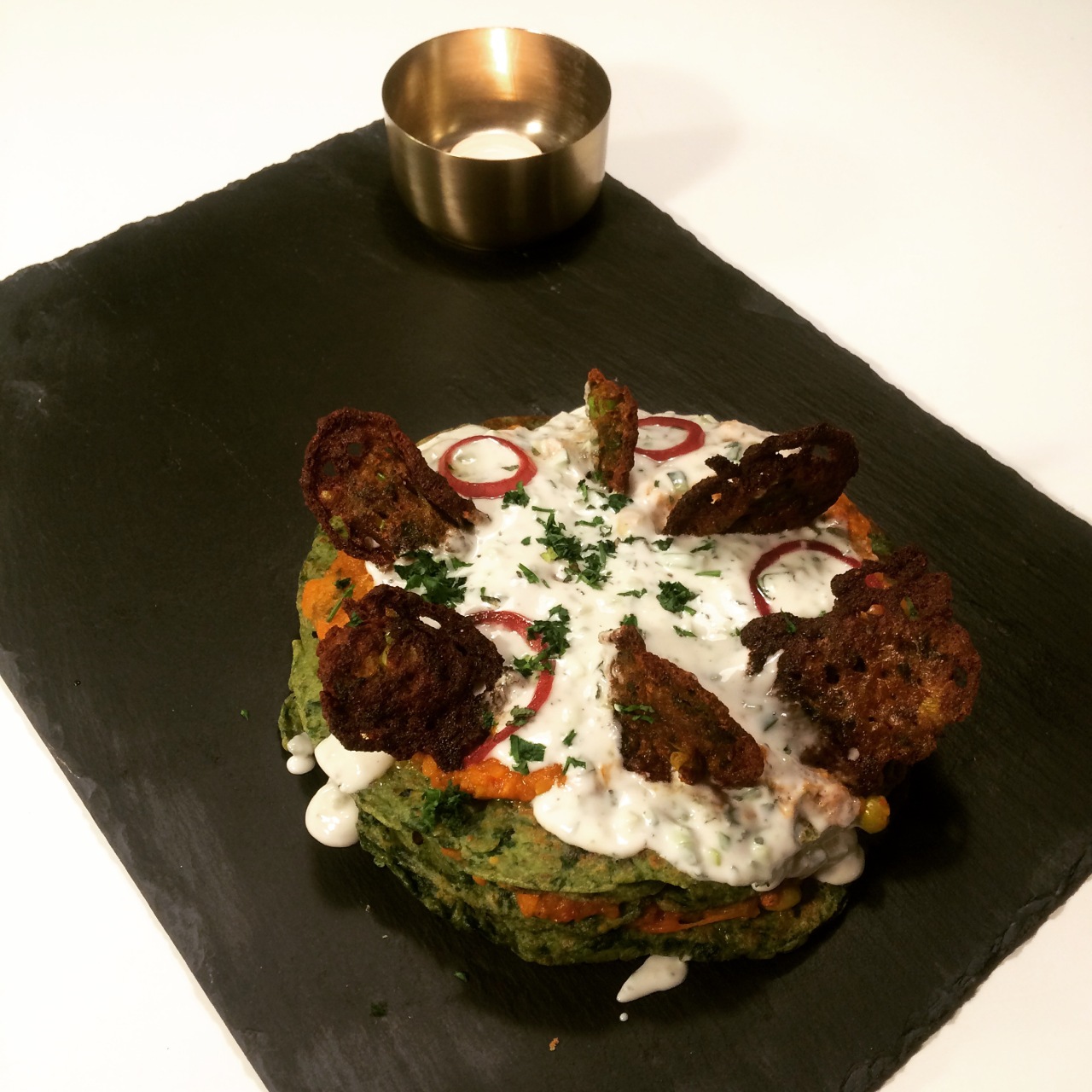 This is what I made on Pancake Day, or Shrove Tuesday as an alternative to sweet British pancakes with lemon & sugar…which are amazing btw! Here’s how you can make these for dinner and have the sweet ones for dessert 😉 These are also, omitting the Oatly for  another plant milk/ yoghurt alternative, gluten free too!

This recipe is a doddle to make, simply start by heating up your aquafaba on a low heat in a pan with the chia seeds. This should start the chia seeds coagulation process.

Whilst they begin to heat up, you can get your dry ingredients ready. Sieve the spices, green barley powder, gram flour and salt & pepper into a big mixing bowl. Once you can see the chia seeds have began to open and make a gel, take the mixture off the heat.

with a hand blender, pulse the spinach ever so slightly until it begins to break up. Combine with the aquafaba/chia mixture, then add the kalonji seeds. mix until you get a green, gloopy mixture. Now, all you have to do is simply mix with the dry mixture and add a splash of non-dairy milk accordingly until it becomes a thick batter.

Fry in an oiled pan, remembering to spread the mixture evenly. Keep an eye on the level of oil in the pan, between pancakes, you may have to add a bit more oil.

once they are all cooked, stack them on a plate for later.

I had a bit of batter leftover, but not enough to make another pancake. Instead of wasting it, I decided to make these bhaji bites. To the batter I added 1tbs of finely chopped spring onion, 1tsp turmeric and 1tsp paprika. mix and dollop a teaspoon worth into the pan, to which I added an inch of oil. They will slightly expand and bubble. Cook until crispy, but be vigilant as they can burn easily.

Once done, pop them onto some paper towel to drain and pop the leftover curry in a pan/ microwave to heat through.

Whilst you’re waiting for the curry to re-heat, it’s time to make the raita. Chop the mint & cucumber finely, adding to a bowl. Mix through the yoghurt/ fraîche. If you’re using the Oatly fraîche, you may need to add a splash of water to the bowl, as its quite a thick product. Season with salt & you’re done!

Layer each pancake with a big dollop of curry, then on the final layer, top with the raita & garnishes and finally crown with the bhaji bites.

It’s great paired with a light & refreshing beer. I made a shandy out of Five Points Ale & Cawston Press cucumber & mint soda and it worked perfectly! 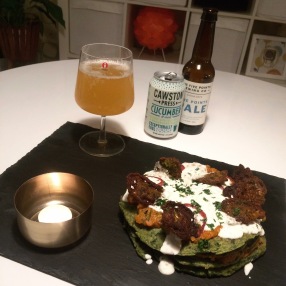 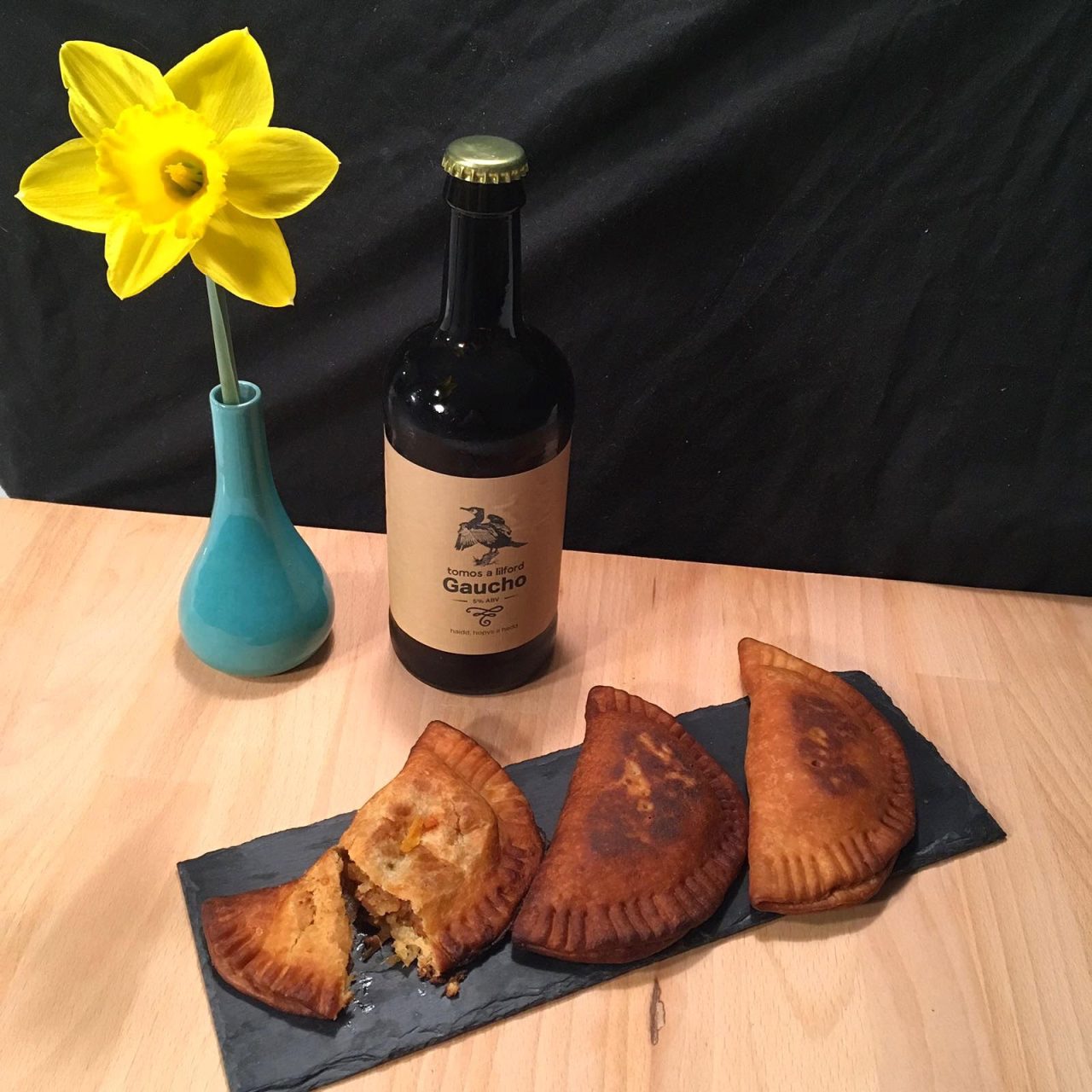 Recently, to honour Y Wladfa – the Welsh colony in the Chubut province of Argentina – I made cawl empanadas out of leftover jackfruit cawl mixture. The results were absolutely delicious and the spices go really well with the stocky richness of the cawl to create a moreish empanada filling.

Combine the cawl with the spices and the puree in a pan and allow the spices to infuse. Allow the water to boil away until you’ve got a dryer mixture.

Roll out the pastry and use a small bowl to shape the empanadas. Spoon out the mixture onto the disks of pastry and fold over. Crimp the edges together with a fork and place on a baking tray. One roll of pastry makes roughly eight empanadas but it will depend how much leftovers you have.

Bake in the oven for twenty minutes at 180°c or until golden brown. Remove from the oven and place on a rack. Bring the oil to frying heat in a frying pan and quickly dunk the empanadas in the oil for twenty seconds each side. The pastry should change colour quickly so be ready to get them out quick!

For an indulgent touch, serve with some vegan mayo pepped up with smoked paprika and garlic oil.

I paired mine with a bottle of Gaucho from Tomos a Lilford. A light yet full bodied South American IPA brewed with Yerba Mate in 2015 to celebrate the 150th anniversary of the Welsh landing in Patagonia. 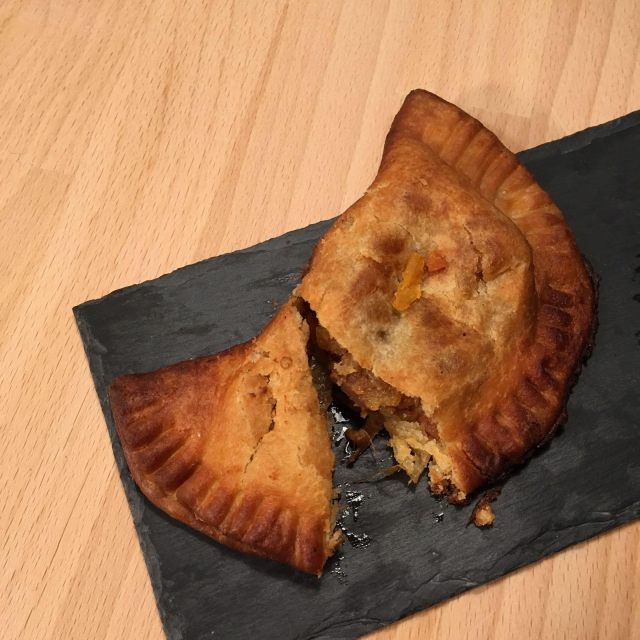 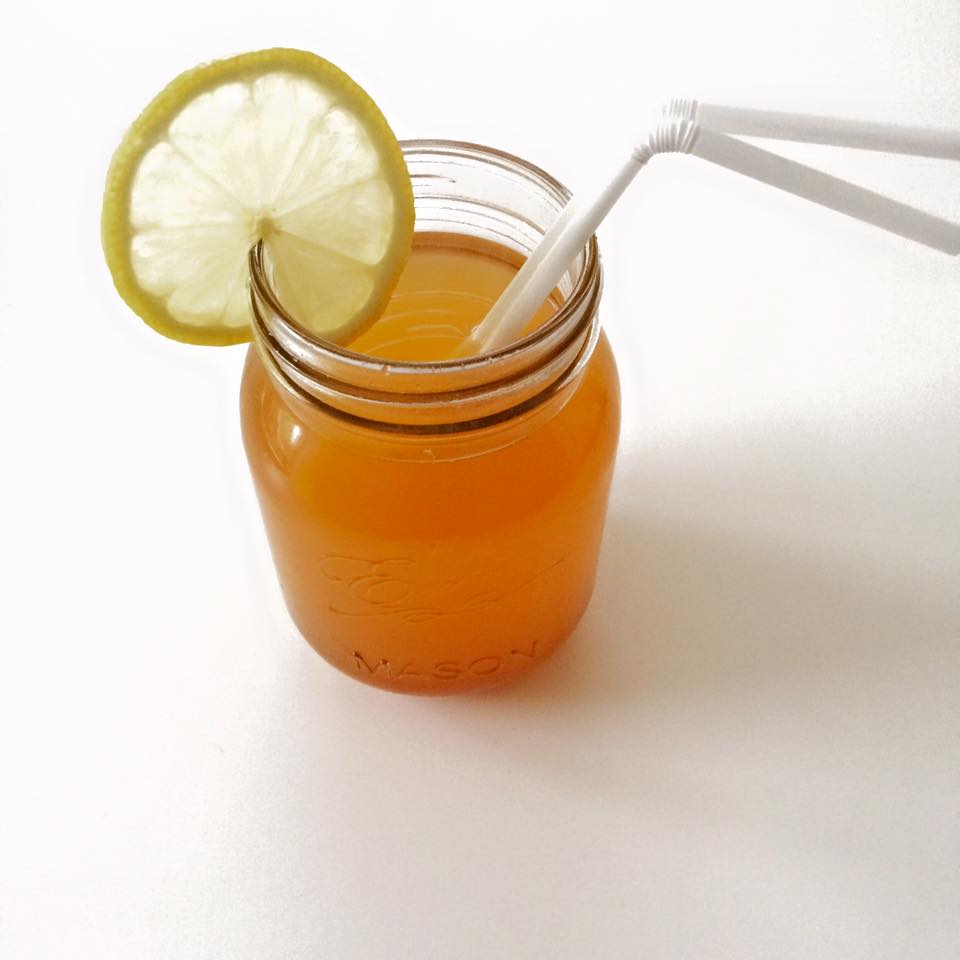 This morning I woke up feeling like absolute death – blocked nose, scratchy throat and phlegm’d up to my eyeballs (sorry!). Deciding to take the matters into my own hands and show it who’s boss, I made up a fiery concoction that will help de-congest, clear your sinuses and help you feel a little less rubbish on those long February days when work, kids and your immune system have got the better of you.

The recipe could not be simpler. It’s exactly the kick you need when all you want to do is hide under the duvet and hypnotise yourself with films all day (just me?).

Start by putting the water on the hob, on a medium heat until it starts to simmer. Then, add the agave and stir. When it’s dissolved, add the grated ginger, black pepper, cayenne and chilli flakes. Next add the lemon juice & zest and give it a stir (the heat from the chilli should already begin to tingle your nose). Simmer for 8 minutes. Then, add in the coriander leaves and simmer for a further 2 minutes. Take off the heat and strain into your mug/glass of choice. Leave to cool a few minutes, then add in the vodka. With a final stir of a spoon, it should be done.

Easy and you should be feeling less bunged up in no time!

I’d recommend you sip it though, as it will blow your head off! 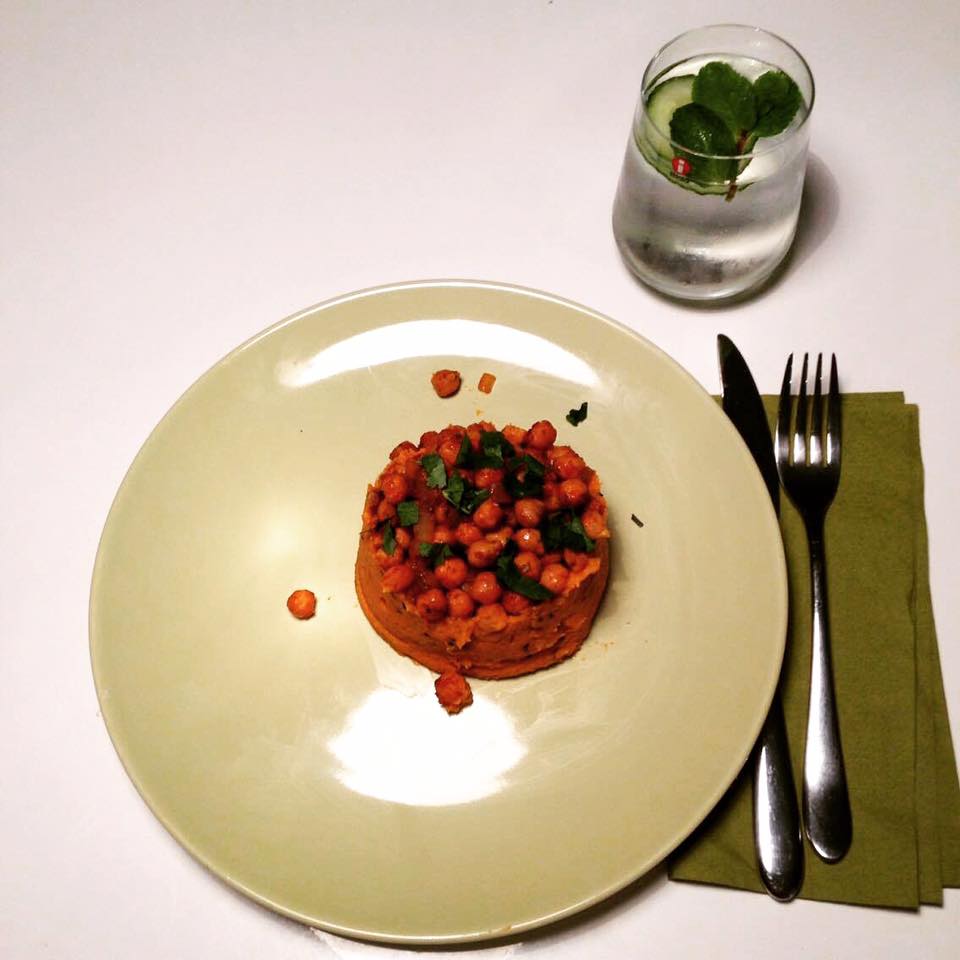 Here’s a recipe for a tasty, easy and satisfying Indian inspired mid-week meal.

For the korma mash:

For the Marsala chickpeas:

To start, get a deep Dutch oven/casserole dish and place the sweet potatoes in their skin along with drizzle of oil and a sprinkle of salt. Bake in a preheated oven at 180°C for 40 minutes with the lid on, this should both roast and steam the sweet potatoes. After this they should be tender enough to pull apart with a fork (depending on the size of your potatoes, of course. If not, simply put them back in until done). Place into a bowl and set aside to cool.

Once cool, the skin should peel away effortlessly. Place the orange flesh back into the Dutch oven and mash until a smooth purée, then put it on the hob on a low heat. Next, add in the spices and cook the mixture until they have infused the mash with the subtle flavours of South Asia, then add in the coconut milk and Nigella seeds. You’ll want to use the thick and creamy tinned coconut milk, rather than the coconut milk you get in a carton. Stir these in until you have a creamy and speckled mash. Season to taste and with the lid on, set aside. Essentially the hard work has been done, the rest comes together very quickly.

Drizzle a frying pan with a little sunflower oil and place on the hob on a medium heat. Add in the chopped onion and fry off until translucent. If you’re using fresh ginger, now would be the time to add it, along with the tomato purée. Then it’s time to add the myriad of spices. Cook it all out until the spices have infused the purée, then add in the drained chickpeas. You should hear them sizzle as they enter the pan. Add in the garlic oil and fry off for a few minutes. With a final blast of seasoning, some ketchup for sweetness and a squeeze of lemon juice they should be done – and you could leave it at that, but for an extra level of texture, spread the spiced chickpeas on to a baking tray and place in the oven for 8-10 minutes. They should start getting slightly crisp.

To assemble, I used a chef’s ring. Simply place on the place and fill 3/4 full with the mash mixture, then top up with the Marsala chickpeas. Garnish with some chopped coriander and voilà – tis done.  We served ours with a lemon, gin, mint and cucumber cocktail, which perfectly compliments the spicy dish with fresh and summery cool.